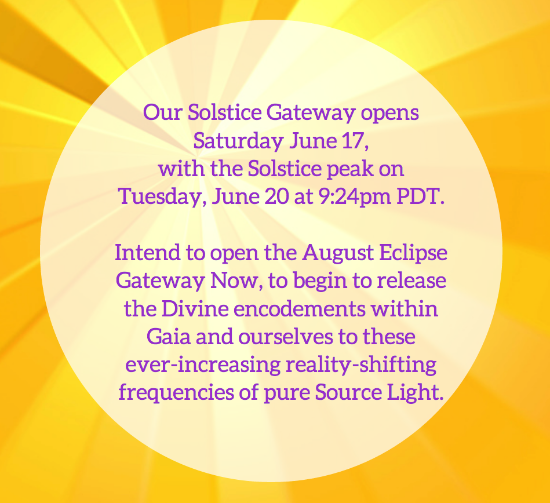 The West coast Gateway for the eclipse passage was initiated on Thursday June 8, and fully opened on Friday June 9 with Full Moon Gridworker ceremony on the Oregon coast. Gratitude to those who participated in this opening, both in the physical and the etheric. The passage was opened right at the point where the eclipse path touches land and begins to cross the USA.
Perhaps you noticed the shifting of energies as this Gate amplified over the last week. The eclipse pathway and its metaphoric reflection of the higher unfoldments was immediately apparent. I saw the pathway blasting open, and connecting to the eclipse exit point in South Carolina. East coast Gatekeepers, gather and do the same Now. You’ll need more than three HUmans (we had 13) to open it properly, as the eclipse represents unification across all levels of consciousness.


Eclipse Pathway – Lightworkers open this Now
Our direction to open this eclipse pathway NOW allows the purer frequencies of the Primary Christed timelines to be available, felt, and utilized by Gatekeepers and Gridworkers.

We will continue to prepare the New Earth Grid for this strong cosmic trigger passage. Gatekeepers, Gridworkers and Lightworkers; We are co-creating with this Divine passage and preparing for the maximum effect right now through the Lion’s Gate (8/8) when this Gateway opens.

The August Gateway flows August 4 through August 25, a massive opportunity to engage with the cosmic influx and timeline-shifting frequencies. If you are guided to Gatekeeping or Gridwork along the path of the eclipse, do it now. The energy is there already, we are already in the zone of these massive waves of interuniversal light flows.
Bifurcation of Realities
The linear experience allows for the sensation of frequency jumps and dramatic increases in light quotient, expansion, and awareness of higher levels of Source-as-Self. It appears as more separation as the timelines divide, which is why the ancient texts described it in terms of light-dark, black-white, good-bad, heaven-hell duality. As we experience this prophetic passage, the metaphoric prophecy becomes physicalized in the external reality.
We physically see the rapid increase in divergence in the external; this jump began last September with the Timeline shift. It unfolds as complexity in the lower timelines as political, social, economic, and personal challenges to the status quo. Increased polarization is an effect of the dimensional shift, time collapse, cosmic rays, and magnetic shifts in our Solar system and galaxy. However, the bifurcation of timelines also allows the higher resonation to pop out of the lower entanglements, providing ever-increasing sensations of expansion, divinity, purity and unwavering love as the Primary timeline Gateways open.
Over the years we have witnessed the division of reality choices, even within the Light Tribe. We still see each other in the physical realms, but the vibrational mismatch is becoming wider and wider. Technically, the denser reality has already departed; this is an unfoldment of what has already occurred in the higher realms.

The lower-vibrational chaos is not as physical as it appears, it is there for the collective experience. This is why the Higher vibrational consciousness is able to see through the holographic projections, choose to engage with the creation of New Earth/New Universe, and have much more expansive experiences right now. The higher timelines allow access to your Creator State of beingness, which reveals the larger perspective of the Universal rewrite.

This is also why the lower reality feels surreal, over, done, complete. The collective old template drop-off in September occurred because those lower vibrational realities lost energetic support. Bit by bit, the lower timelines drop away from our experience, and this is occurring at a faster rate as the timeline split unfolds.
I noticed again this week the eerie stillness of the secondary timelines adjusting to the higher frequencies. The sensation of time disappearing or standing still, like during Gateway work. I feel this will become a more frequent occurrence as the August Gateway approaches.
Bifurcation Awareness in the Collective
True comprehension of multidimensionality includes embracing all of your creations, simultaneously. The timeline split is providing a purer experience of your existence outside of the boundaries of time, at a pace of integration which compliments the highest interests of all concerned with Ascension. Our exposure to zero-point states becomes more intense, so we may collectively raise all willing consciousness into the proximity of the Gateways of the New Earth experience. We open the doors and demonstrate what is possible.
A friend wrote that Bashar mentioned a physical splitting of realities in an April transmission, which is interesting since April is when this accelerated timeline split began to occur. (I have no opinion on Bashar, other than appreciating his agreement that Mount Shasta operates as a crown chakra rather than a root.)  The Division of Worlds was placed on the back burner for a while, it is notable how many are tapping into this unfoldment since December. It is clear that a powerful activation of self-realization is upon us, which must be displayed in the physical as resolution of the story of Gaia.
As more Wayshowers and conduits mention this physical representation of the dimensional shift, we are handed the task of demonstrating to Humanity what Embodiment is about. Appreciate this impressive passage; it is a very esoteric, mystical, and spiritual experience.

The grand experiment of experiencing a dimensional shift through the body is the unique thing; we feed this information back to Source. The Universal completion of a creative idea and the birth of a new one is reflected in our present experience. It looks planetary, then Solar, then Galactic, then Universal as our conscious awareness expands to comprehend higher multidimensional aspects of consciousness.

Lower vibrations play with miscommunication, political polarity, social divides, erratic behavior, judgment and emotional reactions. The higher vibrational collective still sees the lower realities but are not attached to it. The lower timelines are like a movie playing in the house at the end of the street; it’s still there, but distant.
The August Solar Eclipse: Use the Solstice Influx
This event is about completion and revelation of the New. It is a strong activator of divine destiny, and the resolution of multiple layers of planetary conflict. This cosmic stargate will sweep from one ocean to the other, crossing North America in the area of the USA. On August 21, this total eclipse of the Sun will be visible from a narrow track which cuts diagonally from Oregon to South Carolina. In the direct path, Solaris’ corona is revealed for 2 minutes. Because the eclipse is a culmination of many multidimensional events, I AM creating a video to pull all of the intel together.

Our Solstice Gateway opens Saturday June 17, with the Solstice peak arriving on June 20 at 9:24pm PDT. Intend to open this August Gateway Now, to begin to release the Divine encodements for the eclipse Now, and open Gaia and ourselves to these ever-increasing collective shifts in our realities.

Let us share this new level of the Divine HUman experience and provide support for the Solstice by unifying on SUNday through the Unity Meditations. All are welcome to this pure field of consciousness to assist in the Ascension at 8:11amPDT, 11:11amPDT and 5:11pmPDT. Let us show Humanity what is possible with Unconditional Love and Service!
Have a beautiful Solstice week, and use this pristine LoveLight to assist in the highest interests of all concerned with Ascension.